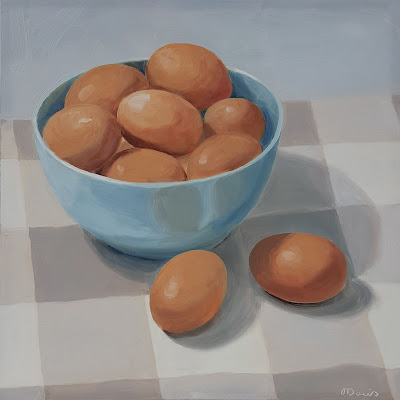 These are literally branded 'happy eggs' - "from chickens free to roam outdoors on 5 acres of land", apparently!
They were ridiculously difficult to paint- so much subtle variation in hue and value. I resorted to using a filbert brush (a soft, flat rounded brush) for the majority of this painting as these eggs needed a soft edge. The checkered tablecloth was a lot trickier than I thought it would be too, especially when it came to painting the shadows. I will definitely use the tablecloth again though. I very much like this muted, soft pastel colour scheme. I have a million ideas for similar still life paintings using a similar scheme. I'm very happy with it, so the title is appropriate!

Before I started the painting I did a bit of research to see how other artists have handled the same subject matter. There are many artists who have painted this subject - but I was particularly struck by a painting by an artist called Henk Helmantel, a current, working Dutch artist. I don't know if he's all that well known internationally as I couldn't find an English website that featured his work, but wow, I love his stuff.

Heres one of his treatments of this subject which is called 'Witte kom met eieren' (White bowl with eggs): Absolutely lovely, super-talented and very skilled.  It's a hyper-realist style which I love when other artists do it, but I don't aspire to be be able to paint like that myself. I prefer to be able to see some of the brushstrokes and I already fiddle with my paintings way too much.

Posted by Jacqueline Davis at 9:38 AM No comments: 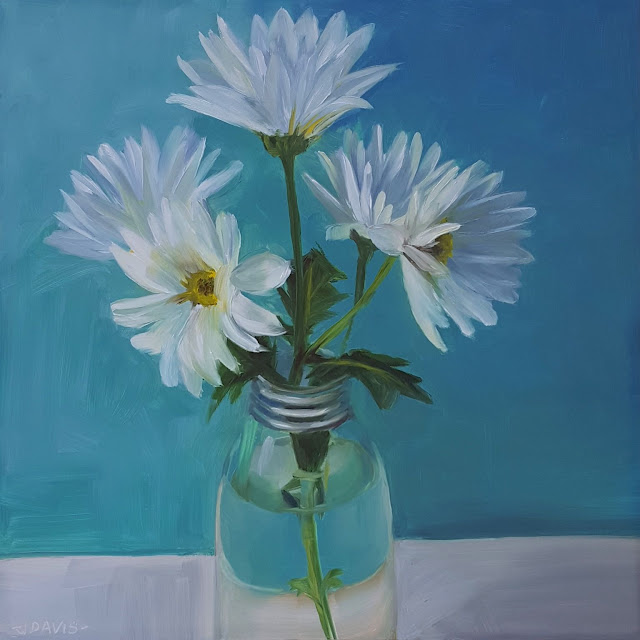 I wasn't sure what to call this painting, as honestly I'm not sure whether these flowers are Daisies or a form of Chrysanthemum. And the shop I bought them from was not helpful in having them labelled simply as 'fresh flowers'. I think they are a form of Chrysanthemum since I think daisies have individual stems rather than lots of flower heads all attached to the same stem? Or maybe they are something else entirely. Anyway, if I get to paint them again while they are still perky, I will try to find out what they are! If anybody knows, please let me know.

I'm still on a quest to work out what the colours are in white shadows. In the end I mixed a ton of colours which varied from a sort of violet to a sage green.


Posted by Jacqueline Davis at 2:27 PM No comments: 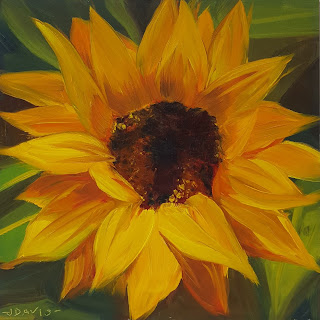 It's been about a week since I did any oil painting, however I have had a different sort of brush in my hand, since I was decorating my daughters bedroom all week!

The shops seem to be full of sunflowers at the moment so I thought I'd do some studies of these I picked up.

This variety are a particularly vivid - almost orangey hue. I have daylight bulbs in the ceiling of my basement studio (I will post something about that at some point) - the sunflowers look great in there.

I really wanted to try to capture the light and the 'glow' these sunflowers have.
I've been reading up a lot about the difference between opaque and transparent pigments in oil paints.
Greens and blues - particularly ones that I use a lot such as ultramarine and phthalo are transparent, and if you use them in the background without mixing white into them, it gives your painting the illusion of depth.  Most yellows, apart from a rare few, tend to be opaque.
Adding white tends to remove some of the saturation so I decided to use no white at all in these paintings, to keep the pigments as pure and as saturated as possible,

I think it worked to an extent. I used yellow ochre mixed with cadmium yellow deep for the shadows on the petals.
One way to darken yellow is to mix it with it's complimentary colour, which in this case is violet.
I discovered that if you mix violet with lemon yellow you get yellow ochre! A new discovery. 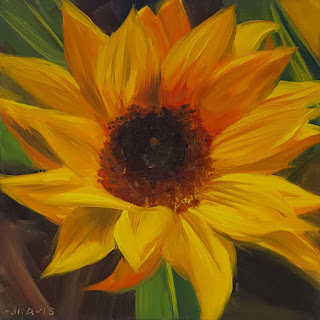 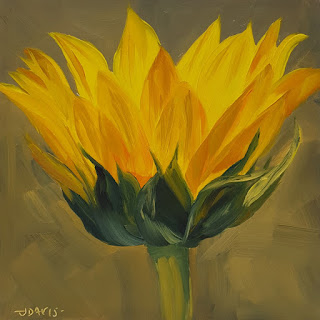 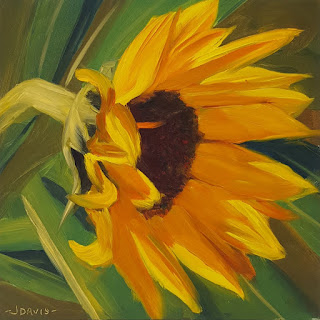 Something else I learned from painting these 4 times: It's always a dilemma whether to paint the background or the main subject first. The first couple of paintings I decided to paint the background first because I wanted to be able to sweep the points of yellow petals into the green background with my brush. However this means that you inevitably get green paint on the end of your brush and have to wipe the brush in between every stroke!
So for the third attempt, I painted the flower first, but then I had to carefully paint around each petal for the background, losing that spontaneity you get from the sweeping brushstrokes.
By the fourth attempt I did a sort of combination of both, blocking in the basic colour for the flowers and background, then finishing with sweeping strokes and petals. In the end the results were all similar but the last one required less work.

I read that Whistler often scraped back his painting multiple times and overpainted with loose strokes, leaving the impression that his paintings were painted with spontaneity, when in truth a lot more work had gone into them.

I was inspired to read up about Van Gogh's sunflowers (see pic below). He did at least 7 versions of his stylised sunflowers over a very short period of time ( I think he did 4 paintings in a week!), as well as a number of small studies.

I like this one of his best. I think it is brighter and fresher than the other versions.
It is part of a private collection though, sadly. 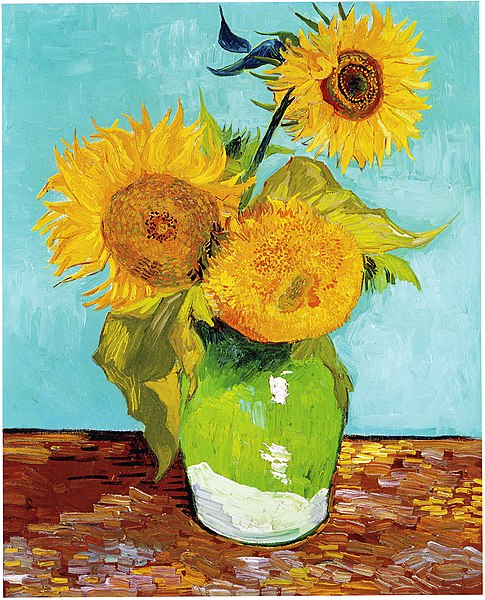 Posted by Jacqueline Davis at 7:57 PM No comments:

To email me please use the contact form below..